A celebration of food and community: The Mighty Waikato Cookbook 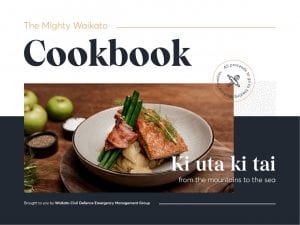 The nationwide COVID-19 response presented varied dilemmas when it came to the necessity of food.

For some it was merely figuring out something creative for dinner every night; for others, unemployment and loss of income made food shopping a financial challenge; there was a huge surge in demand for food parcels and free meals from community service providers; and then there were all the hospitality business owners who had to close down and face an unknown future.

All this has led the Waikato Defence Emergency Management (CDEM) Group, with support from Hamilton & Waikato Tourism, to launch a cookbook.

The Mighty Waikato Cookbook celebrates some of our favourite food establishments in the Waikato, encourages local support as the hospitality industry starts to open doors again, and raises money to help put food on the table for the region’s most vulnerable during recovery from COVID-19.

Every donation received for an online copy will go directly to community support projects by Momentum Waikato and Wise Group.

Momentum Waikato’s Greatest Needs Appeal raises money to accelerate and secure the delivery of food and winter essentials to those in real need, partnering with Wise Group and its new Here to Help U service so it knows where to target the support.

Wise Group’s Here to Help U project aims to meet the surge in demand for social services caused by the COVID-19 crisis. A large commercial kitchen at Claudelands Event Centre has so far produced over 24,000 meals and 2500 food parcels, distributed to those in need across the region by an ever-growing group of community providers.

At the same time, Wise Group’s Houchen Hub, supported by Momentum Waikato, has also been producing frozen meals and care packages for vulnerable families across the Waikato. The team has distributed 590 food parcels, 1635 frozen meals and 283 hygiene packs since the start of the crisis.

“It’s about celebrating the hospitality industry which has been unable to operate during the national state of emergency; it’s about encouraging our communities to support them again once restrictions have been lifted, and foremost it’s about raising money to help those who are struggling to access the simplest of necessities which is food.”

The cookbook is a culinary journey of the Waikato from the mountains to the sea. It’s filled with delicious recipes from iconic restaurants and cafes. With over 50 recipes and 40 establishments, there is something for everyone.

Hayes Common Neighbourhood Eatery owner Lisa Quarries says the cookbook is a great way to highlight all the fabulous eateries on offer, the diversity of Waikato producers and premises, and the hardworking locals who work in hospitality.

“It’s perfect timing to support an industry that’s feeling the heat due to COVID-19 but is well placed to thrive once we come through the other side. By supporting local you support the business owners, producers and suppliers, but also the modern day community hubs that are so important for us social creatures.”

The Mighty Waikato Cookbook can be bought for a donation and downloaded at mightywaikatocookbook.co.nz. Donations are pay what you can, from as little as $5 to as much as you feel you can give. An idea could be to pay the price of a favourite meal out which you have been unable to have since lockdown began or consider how much it costs to feed a family for one day.