Young people give hope, joy and happiness to homeless people this Christmas

Inspiring acts of generosity by Waikato school children have left The People’s Project Hamilton team reassured that the spirit of Christmas is alive and well.

“Letting them know someone cares”

Earlier this year, Cambridge Middle School students Caitlin Hill (age 12) and Olivia McFetridge (age 13) decided their end of year assignment would be dedicated to helping someone in their community.

Helping ‘someone’ became helping as many people as they could when their research led to learning more about homelessness. This sparked the idea of a care pack and more research about what people living on the street might find useful.

Armed with this knowledge, the pair raised $280 by knocking on doors in their neighbourhood and appealing to their close relative’s sense of compassion. Cailtin said their grandparents and Aunties were very generous!

Over the past six months, the girls have spent an hour or two every day working together on the care packs. With only 3 cents left over, they created 10 packs which they’ve gifted to The People’s Project to give to people living on Hamilton’s streets this Christmas.

Along with a strong sense of social justice, the girl’s environmental values were incorporated into the solution. They approached Plastic Bag Free Cambridge which made 10 environmentally-friendly bags to contain the products in the packs.

Toothpaste, toothbrushes, a comb, a blanket, water, deodorant, muesli bars, socks and tissues are just some of the practical and gender-neutral items included. Each pack also includes a Christmas card with personalised messages, penned by Olivia and Caitlin’s school friends and teacher.

The People’s Project case manager Lisa Travaglia said while these personal items might appear to be pretty ordinary everyday things, for people on the street they were “luxuries” and not within budget for many of the folks Lisa and the team work with.

“They’ll be really helpful, gratefully accepted and will make Christmas a little nicer for the people who get them,” Lisa said.

Olivia and Caitlin said they wanted to do something about homelessness right now.

“We wanted to do something nice to let homeless people know that there are people who don’t think it’s ok, and who do care about what happens to them,” Caitlin said.

“Seeing the kid inside the adult”

An assignment about Human Rights has led a group of Year 5 and 6 Silverdale primary school students to raise $210 for homeless people in Hamilton.

Students Lockie, Liam, Nathan, Hamoodi, Hunterleigh, Baxter and Scott, along with mums Stacey and Dawn, made a special visit to The People’s Project this week to gift the money, which will be used to pay for 20 people to attend Christmas lunch at the Salvation Army.

The money was raised by holding a “wheels” event; students brought their bikes, scooters and skateboards to school for a day and made a gold coin donation. The small team of 7 students and their teacher Miss Curry set up free-riding zones and a riding track for students to improve their skills – whatever their choice of wheels.

Speaking on behalf of the team, Liam said 80% of the school participated and thought it was “heaps of fun”.

The People’s Project Hamilton service manager Kerry Hawkes spoke to the group about homelessness and how it happens.

“It’s awesome that young people your age are showing an interest in people less fortunate. There are a lot of myths about people who are homeless that are just not true – like they choose to be homeless.  They were kids once, just like you are now, but life didn’t go quite right for them, and some bad things happened.

“We see the kids inside the adults, and we work really closely with them, doing what we say we’re going to do to earn their trust and support them into a home of their own,” Kerry said.

The student’s enthusiasm and excitement in gifting the money filled the office with laughter and energy. The meeting ended with Liam making arrangements to “touch base” next year to see what else they could do for homelessness. Even though they won’t necessarily be in the same class or the same school next year is not holding these inspiring young people back – the willingness and drive to work together and do good clearly gave them immense joy and a real sense of purpose.

With young people like Olivia, Caitlin, Lockie, Liam, Nathan, Hamoodi, Hunterleigh, Baxter and Scott thinking about how they can make the world a better place – we are in good hands for the future!

Wise Group joint chief executive Julie Nelson said young people were grappling with today’s social issues, and she was both impressed and surprised by the number of schools and students contacting The People’s Project wanting to do something about homelessness.

“When we tell the people receiving these gifts that they were created or fund-raised by young people, the sheer delight on their faces is truly a wonderful gift at Christmas,” Julie said. 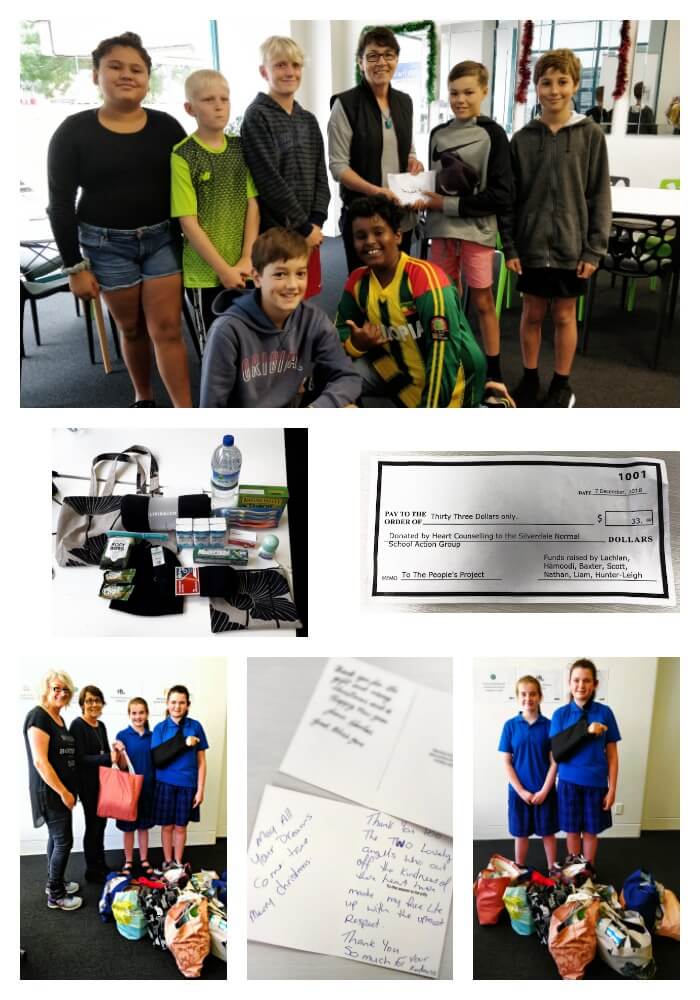 Top row: Pupils from Silverdale Normal School with Hamilton service manager Kerry Hawkes.
Middle row L-R: The inside of the care packs and a donation from one generous donor to the “wheels” event.
Bottom row L-R; Lisa Travaglia and Kerry Hawkes with Olivia and Caitlin; thank you cards from two of the homeless people who received a care pack; Olivia and Cailtin with their care packs.